*   Information on individual herds will be added in due course.  We are very happy to receive any information, historical or contemporary, that you may have on any feral herds.  Photographs with locations are particularly helpful as is up to date information on numbers. 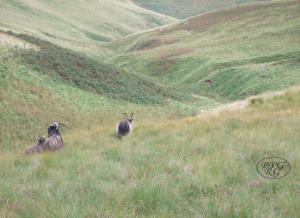 In the one hundred years or so between the late nineteenth century and the publication of Whitehead’s gazetteer of feral herds in “The Wild Goats of Great Britain and Ireland” a total of 233 locations where feral goats once occurred have been identified (Whitehead (1972) plus collation by R. Werner from numerous other reports) but these populations have been in decline for some time; many herds comprised very small numbers and many units are now extinct.  By the 1950s at least 60 of the 233 locations no longer supported any goats, often due to shooting off as softwood plantations were developed on areas that had formerly been hill farms.  In 1969 Greig recorded only 60 populations in Scotland.  By 1990 the number of herds had again diminished; Hellawell (1993) records 45 herds across Scotland and northern England with a total population estimated as c.4,000.  Large culls subsequently have seen numbers continue to drop dramatically in some areas.  Trophy hunting for male horns has also contributed to the decline.  The number of true British Primitive Goats has therefore been severely reduced.

However, it is not just the extinction of various herds that is a threat. There has been no widespread overview to date of how many of the remaining feral goats are likely to be true British Primitives that have escaped introgression with modern breeds.  We know of some herds composed entirely of modern goat breeds and others where it is apparent that modern breeds have been introduced alongside primitive stock.

In many cases it is not recorded how long each of today’s feral herds has been in existence.  They may be of great antiquity or from more recent times. For some, the historical record makes it clear that they existed before the creation of our modern goat breeds in the late 1800 and early 1900s.  However, care is needed since knowing goats existed on a site several hundred years ago and that there are goats present at or near that locality today does not in itself indicate continuity of type.  Each herd needs to be carefully evaluated on its own merits; phenotypic comparison with old pictures and descriptions helps lend weight to the primitive nature of some herds together with a more continuous historical record.  Hopefully in time DNA analysis will help to elucidate where the best remaining individuals occur and so foster a conservation programme.

It is therefore imperative to try and identify the herds where the best remaining examples of British Primitives still occur and that we establish and protect a secure gene pool of these iconic animals for the future.