Our studies so far indicate that any intermixing of modern breeds can instantly change some of the most characteristic features of the breed and that it is then difficult to breed out these changes.  In particular we have observed changes to the ears, head and coat.

How should they be regarded?  Feral, Wild or Native?

British Primitive Goats living a truly ‘wild’ and unmanaged existence (apart from random culling to reduce numbers) in parts of northern England, Wales and Scotland are generally referred to as feral goats.  This is a disservice in several ways:

So, if not feral how should British Primitive Goats be regarded?  Wild or native?  Wild or native animals are generally afforded protection under wildlife legislation whereas feral animals are not, so the distinction is an important one.  The UK National Standing Committee on Farm Animal Genetic Resources (NSC FanGR) invokes the following tests to determine whether a breed can be considered native:

Certainly the above criteria would seem to be satisfied for some of our ‘feral’ herds of goats.  We feel that it is more appropriate to regard them as wild examples of our native goat.  British Primitives of a herd in the Cheviot Hills have been accepted onto DEFRA’s Native Breeds at Risk Register (see Cheviot Goats at https://www.gov.uk/government/publications/uk-breeds-at-risk-from-exotic-animal-disease-outbreaks/uk-breeds-at-risk-list-barand) and we hope that as further research examines other herds more will follow. 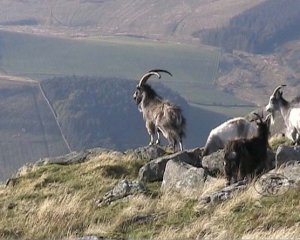 British Primitive Goats have over the centuries provided numerous services to man.  They helped clear land of forest and scrub for the early farmers to provide grazing for cattle and sheep; they have sustained generations with their milk and meat and provided skins, hair and tallow.  Goats appear in numerous folklore tales and the plethora of place names referring to goats indicates how widespread they once were. Country practices of running goats with other livestock were common; they were said to keep sheep away from inaccessible cliff ledges and act as weather prophets and guides for hill sheep before the advent of bad weather, leading them onto lower, more sheltered ground.  Keeping them with other livestock supposedly prevented contagious abortion.  They were reputedly good at killing adders which is entirely believable having seen our own captive British Primitives trample large rats.  There was a brief period in the late 20th century when their use for cashmere production was investigated but unfortunately the market then declined.

These goats are part of our culture and heritage so we should of course want to preserve them in their own right.  However, to secure good numbers of individuals for the future we also need to consider commercial or environmental opportunities.  Their physical characteristics and hardiness distinguish them from other goat breeds and so they are an important source of genetic material.  Being survivors from the days of extensive husbandry on poor upland areas, who knows whether we may need to call again on such a resource in the future. They provide excellent educational opportunities and few can fail to be thrilled at the sight of a majestic long-horned billy or enthralled by the playful antics of young kids.  There may be small scale opportunities for enhanced tourism or game meat for high-end restaurants but the most frequent use for British Primitives is likely to be for conservation grazing.  While in some areas goats are considered a pest, in others they are invaluable for clearing scrub in the management of wildlife areas.  They are prodigious consumers of bramble and gorse, and prevent tree regeneration where this is needed, helping to promote species-rich grasslands.

We are happy to advise anyone considering keeping British Primitives for conservation grazing and can provide contacts where such projects are already having success. 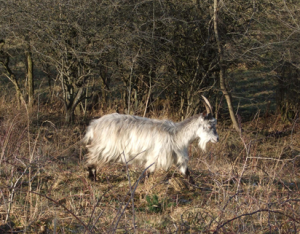 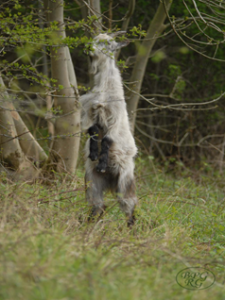 Looking to the Future

It is a travesty that our original and only goat breed established here over thousands of years is held in such low regard.  Currently, the wild populations largely exist on sufferance; at worst they are viewed as a pest to be despatched at the whim of whose ever land they are on; at best they are regarded with passing interest but often still a nuisance.  The following factors render them vulnerable: 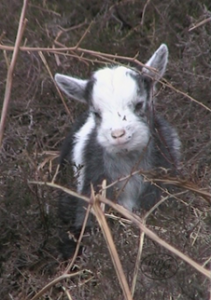