The British Primitive Goat Research Group has evolved from the British Feral Goat Research Group which was founded by Shirley and Les Goodyer, Tracy Livingstone and Raymond Werner in 2003.  At that time our impetus was to examine feral herds and look for evidence of surviving examples of what we termed the British Primitive Goat, the original landrace breed of goat in Britain.  This breed of goat had lost favour from the late 1800s onwards with the desire to ‘improve’ breeds and maximise dairy production.  As other foreign breeds more suited to higher milk yields (Toggenburg, Saanen and Nubian) were introduced, our British Primitive goat was amalgamated with these bloodlines and died out in domestication by the mid 1900s but has managed to persist in some of our long-standing feral herds.

Having now found what we believe to be good examples of the British Primitive Goat surviving in  feral herds the need now arises to promote and protect these both in their own right and as a genetic resource for the future.  Most units of feral goats survive in the bleakest of areas, driven to the extremes of conditions by man’s use of all but the least productive areas of land.  Even so, they are still frequently regarded as pests, especially where they come into conflict with forestry, and face frequent culling.  There is currently nothing to prevent a landowner culling feral goats on their land and they fall outside any wildlife legislation.  Also, some herds have been spoiled by inter-mixing with modern breeds which destroys the distinctive characteristics of the old landrace type.  It is now imperative that we try and establish a safe gene pool for the remnants that are of good breed type. 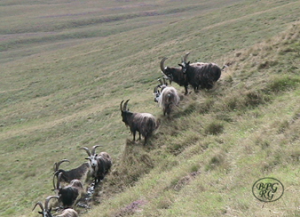 Raymond Werner has researched rare breeds, and goats in particular, for over 60 years and has a long standing enthusiasm for the original old landrace goat of the British Isles.  Shirley Goodyer is an ecologist who has both kept and researched British Primitive goats for over 25 years.  For over 20 years Shirley and Les Goodyer have worked to ‘rescue’ goats from potential culls of a good herd of British Primitive Goats and re-homed them for conservation grazing projects or with private breeders.  However, it is is a slow ‘war of attrition’ and it is not easy to find good long-term homes or establish much needed new breeding units; much more needs to be done to safeguard the gene pool.